Trusting in the miraculous

It is so easy to be skeptical. My first reaction when I see a new skin cream that promises to produce younger looking skin, or a new vitamin that gives extra energy, is to ask what evidence the makers of those products have to back up their claims. There are strong penalties in Australian law for people who make claims with no evidence to back them up.

For skeptics, the book of Jonah is a problem.  Jonah is famously swallowed by a “great fish” and stayed alive inside the fish for 3 days and 3 nights before being vomited out.  This seems just too much to believe for many people.  Many equate believing in a fish who safely swallows and vomits out people with being completely mad. 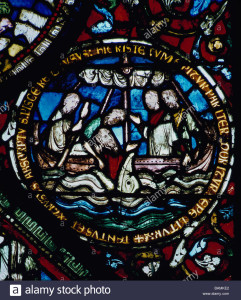 (The image above is part of the stained glass at Canterbury Cathedral, depicting Jonah and the whale)

There have been many ways commentators on Jonah have attempted to explain away the fish. The most popular explanation is that Jonah is not really a historical account but a parable, a fictional story with a teaching purpose. That way, the fish is simply made up, and we can draw lessons from the story like we might from Jesus’ parables. This seems attractive, but the book of Jonah never claims to be fiction. The prophet Jonah was a real person who lived in the 8th century BC under the reign of Jeroboam II of Israel (as in 2 Kings 14:25). Jesus himself refers to Jonah in the same breath as Solomon and the Queen of Sheba in Matthew 12, and it would seem odd to mention a fictional character in the same way as historical figures.

Others have tried to discredit the fish in the book of Jonah by noting that there has never been a credible historical account of such a thing happening anywhere else. Of course, miraculous things by their nature are unique and rare, so the absence of a second instance doesn’t mean the first one didn’t happen.  Likewise, attempts to show that scientifically a person cannot fit and survive inside any known fish are misguided.  No-one would claim that such a thing is likely or scientifically provable; if it happened, it was a miracle.

The most amusing attempt to explain the fish that I have read was the commentator who said that perhaps Jonah stayed for 3 nights in a local inn called “the great fish”! Needless to say, this completely disregards the text of Jonah.

Christians too can be skeptical people. I have never seen a fish eat a person and the person remain alive.  But Christians believe in a God who made the world and controls it. Usually the world works in an ordered and predictable way, which is the reason that modern science is even possible. But in special cases, for particular reasons, God might decide to do the miraculous. The impossible. We don’t know the mechanics of how it works, but we know God can do what He wishes. We are convinced by the Bible and we know the power of God in our own experience.

If we eliminate the miraculous, we eliminate creation. We say that the Exodus from Egypt had no plagues and no parted sea, and we say that much of the Bible must be made up. We eliminate angels, prophecy fulfilled, and the resurrection of the dead. If we eliminate all this, we don’t end up with much but some moral teaching. And we are of all people, most to be pitied if that is the case (1 Cor 15).

I don’t know how God made the fish swallow Jonah or how he survived. But I trust God did it. Skeptical as I am, I know God is powerful enough to make the world and defeat death, so I trust that commanding a fish is a relatively minor thing.

Don’t get distracted by the great fish in Jonah. Be amazed by the kind of God who can do even remarkable things we cannot explain.